Planning a minor bathroom renovation or considering some basic upgrades? Is your toilet looking a little bit old and not performing as it once did?

Before diving into the nitty-gritty of your bathroom upgrade, you need to make a choice: what type of toilet are you going to choose?

We’re not just talking about appearance, either – toilet configuration is something you should think of before starting your project.

Toilet configurations such as S-traps and P-traps stop foul gasses and water from flowing back into the bowl and your bathroom. They also serve as a filter for debris and other objects that might stop wastewater from flowing through your sewage pipes.

If you don’t have the foggiest about what type of trap your new toilet uses, don’t worry – by the end of this article, you will understand how plumbing traps work, and which type is best for your plumbing needs!

It’s a trap! The only question: what does it do?

A plumbing trap is a system of bending and curving pipes that block sewer gases from passing through drain pipes back to your home or building.

Many smell terrible. Some are even lethal in high enough concentrations!

Plumbing traps protect your home from the risks that come with nasty sewage odours by ensuring that harmful gases (and waste – shudder!) don’t make their way back up.

Every time you flush, water goes down your toilet. Some of this water doesn’t go down to the sewer, instead getting trapped (hence the name) in the bend in the pipe.

This water creates a seal that prevents gas from passing back into your bathroom.

Fun fact: thanks to the bend in the trap, they also have a tendency to catch heavy objects that inadvertently fall in to the loo. That means things like watches and jewellery can often still be saved (though we’re not sure how comfortable you’d feel wearing them afterwards!)

S-traps and P-traps: what’s the difference?

When we talk traps, in our experience there are two types that appear in the vast majority of Melbourne homes (and toilets in particular): S-traps and P-traps.

What’s an S-trap, and how does it work?

The first is the S-trap.

Generally favoured for ground floor installations of floor mount-types of toilets (toilets where the pipe goes through the floor), this pipe got its name – how else? – thanks to its shape.

Resembling a sideways “S”, water from the bowl goes straight down and soars upwards before going down again, creating a trap at the bottom of the first bend.

As one of the oldest types of trap on the market, S-traps are extremely prevalent.

However, that also means that there are some sides to the design which are a little bit dated.

Firstly, S-traps take up more room around the waste outlet (which is why they’re more common for ground-level toilets).

A more pressing issue however is that they’re easier to siphon dry than other traps.

This can lead to the water level dropping, opening up gaps for sewer gasses to creep in. This can be remedied by pouring a glass of water in to re-establish a seal – regardless, it shouldn’t reach that point to begin with!

Imagine an S-trap, only instead of going down-up-down to create an S-shape, it goes down, curves up, then becomes straight, creating an open P-shape. That’s a P-trap!

More commonly installed in top floors and in wall-mounted toilets, P-traps are more commonly used in kitchen and laundry sinks.

P-traps are generally considered by most to be more effective and consistent in maintaining water trap compared to S-traps.

Their design makes them less vulnerable to drying out and losing seal: a properly installed P-trap will never lose its water seal.

When they’re not installed properly however, P-traps are just as prone to losing seal and allowing foul gasses into your home.

Make sure your toilet is installed properly by calling a fully licensed Mitcham plumber today!

Why does the trap my toilet uses matter?

Simply put, because you don’t have unlimited space!

Before committing to one type of trap over the other, you’ll need to ensure that the measurements work.

Both types of trap take up space, but in different ways – depending on your bathroom, you might only be able to support one type!

You’ll need to set out an imaginary blueprint of your bathroom and start measuring.

No two bathrooms are identical, so you’ll want to go in with accurate measurements. If space is tight, you might even resort to a skew trap (where the drainage pipe is offset at 90 degrees and connected to an adjacent wall).

If you’re unsure whether you have enough space for a new toilet installation, don’t worry. Call H2-Pro’s Mitcham plumbers – we’ll know what to do! 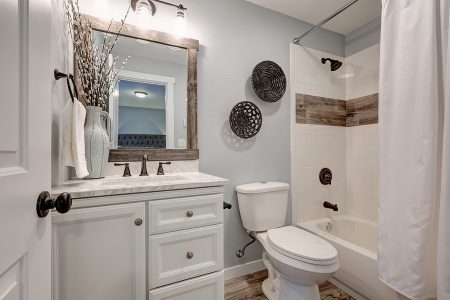 Can’t decide between P-traps and S-traps on your toilet project? Contact Tony and the H2-Pro team today!

We’ve been in business since 2000 – that’s 18 years of repairing and installing toilets in homes all over north-east Melbourne. Trust us when we say we know a thing or two about choosing the most suitable toilet for your home!