An Eltham plumber explains the effects of mould in the bathroom

If you’re anything like us, the monthly bathroom clean-up isn’t exactly something that fills you with joy. The thought of scrubbing out dank corners with a toothbrush is hardly how we want to be spending our time… it almost makes you cringe just thinking about it!

It’s fair to say that bathroom cleanliness is an important piece of home maintenance. After all, you brush your teeth, shower and conduct your business in the bathroom. Naturally, you’ll want it to be as clean as possible.

Of course, it wouldn’t be a discussion about bathroom cleanliness without talking about mould. Today, we’ll be exploring what causes mould to grow in your bathroom, and what you should do if you start noticing any nasty black growth.. 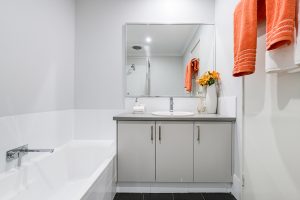 Why is my bathroom suffering from mould?

What is mould? The technical version

Mould is a fungus that reproduces by consuming organic matter and spreading spores to reproduce. In nature, mould helps decompose leaves, debris and wood.

What is mould? What you need to know

Mould is nasty and can have a variety of effects on your health. You don’t want it in your home, and its cause may be plumbing-related.

Mould thrives in environments that are:

Add to that a little oxygen and even a short amount of time (in the right environment, mould can grow within just 48 hours!), and you’ve got the perfect recipe for mould!

And what’s the one room where all of these factors are present in abundance?

Mould is a common sight in the “wet” areas of your home. In many cases, that’s where it starts.

The health effects of mould

Not all mould is unhealthy. In fact, some of it can be quite delicious!

When it comes to mould in the bathroom however, it’s a good idea to get rid of it ASAP!

Like we mentioned before, mould reproduces by sending out tiny spores. And when these spores are inhaled, they can lead to a range of different health hazards such as:

Asthmatics and people suffering from other respiratory conditions are at high risk from inhaling spores. HIV, chemotherapy and anything else that can compromise your immune system are also risk factors for lung infections from mould spores.

Breaking the mould: how you can reclaim your bathroom

One of the most effective ways to put an end to mould growth in your house is to reduce your levels of moisture. By removing moisture, you remove one of the essential ingredients needed for mould to gain a foothold.

Remember to turn on your evaporative fans in the bathroom and range hoods in the kitchen: proper ventilation can be effective at stopping mould from growing.

Another thing to consider? Dehumidifiers.

Not only does this slow the growth of mould, but it can also make living in your home that much more pleasant year-round!

Call an emergency plumber to investigate!

Mould can be cleaned off with enough time and patience. While you might not believe it, when it comes to mould an emergency plumber can be your best friend!

The other danger of mould – besides the health effects on your family – is that is can be a result of a hidden or unidentified leak in the home.

If left untreated, water exposure such as a leak can very quickly lead to mould growth: when pipes and fixtures that run behind your walls leak, they moisten your plaster and building frame.

Combine that with the darkness in your crawlspace and the fact that you usually won’t be able to see it immediately, and you have the perfect environment for mould to thrive!

In fact, it’s safe to assume that by the time you notice mould growth in a wet room of the home, the damage behind the scenes has well and truly been done.

At H2-Pro, we maintain that regular plumbing inspections are something every homeowner should get in the habit of doing. In many cases, this can help identify and fix mould problems early.

In others, mould can be the result of flooding or burst pipes. Either way, you’ll want emergency plumber on your side to fix it ASAP! 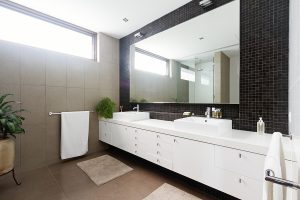 Dealing with mould is never fun. And unless you attack the source of the problem – whether that’s ventilation, a plumbing issue or otherwise – you’ll never be completely free of mould.

Homeowners need to be on the alert for mould. And if you notice the signs of mould in your bathroom or anywhere else in your home, consider enlisting a professional to help identify whether the damage is plumbing-related.

That’s where we come in: H2-Pro is a team of highly experienced domestic plumbers offering expert advice and solutions. Whether you live in Eltham, Warrandyte, or any other surrounding north-east suburb, you can trust us to look after all of your plumbing problems – anytime of the day or night!

If you’d like to learn more about preventing or getting rid of mould and water leaks, be sure to get in touch with H2-Pro on (03) 9844 1444 or use this handy contact form here.