Our plumber in Eltham explains why your water is cloudy – should you worry?

When you turn the taps at home, you expect clear, clean water.

But what happens if that isn’t what your taps give you? What if you fill your glass only to realise that the water is cloudy?

Some people (like us) call it “cloudy”. Others call it “milky”. Officially, it’s called “turbid”. No matter what you call it however, the end result is the same: water that’s more-or-less opaque.

Should you be worried? What’s the cause of it? And most importantly, is it safe to drink?

Our plumber in Eltham breaks it down.

Why is my water cloudy?

Sometimes, you turn the tap on and everything comes out cloudy.

After a couple of seconds however, you notice that the water seems to clear up on its own.

If this happens, don’t get too worried. In these cases, there’s nothing in your water itself.

Sometime it can be caused by differences in water pressure, but normally it’s a case of tiny air bubbles in the water.

Either way, your cloudiness should clear up by itself, just like how a soft drink bubbles. If that sums up what’s happening with your water, rest easy – it’s completely harmless and totally safe to drink. The bubbles normally disappear within a second or two.

But what if they don’t?

If cloudy water doesn’t disperse – and it’s paired with an odd taste – then that might indicate a deeper problem.

Metal piping like copper has a habit of corroding as the years pass.

As water and chlorine (among other things) wear down pipes, they carry heavy metals into your drinking water supply.

And since many of the homes in north-east Melbourne are on the older end of the scale, you end up with homes that still use old, degraded metal piping.

Have you found an outdoor tap in your backyard that you never knew existed?

Or visited an open for inspection for a house that has been vacant for a long time, and tried using the tap?

Turning on the tap results in a murky or cloudy flow of water. Usually, after a few seconds, the water tends to clear up on its own.

This is a common case of stagnant water in taps that are not used regularly.

A few seconds of flushing is all it takes to generally get clean water flowing again, and in most cases, is no cause for concern.

If the water has an odd taste, though, you might like to call a plumber in Eltham to investigate a potential problem.

And if water doesn’t come out white – say, it comes out red, brown or green instead – then you have a major problem on your hands.

In these cases, this is a sign of much worse corrosion in your pipes. Brown can mean rust – while not inherently unhealthy, it signals that your pipes need replacing ASAP.

Worse, it could also be a sign of mould growth in your pipes – needless to say, this isn’t healthy at all.

Is cloudy water safe to drink?

Like we mentioned above, in most cases cloudy water is completely safe to drink, assuming that it clears up quickly on its own.

Unsure whether your water is safe to drink? Here are a couple of rough rules:

If you answered yes to any of these things, we strongly advise against trying your luck.

This points more towards an infected water supply rather than just cloudy water caused by some air bubbles or high water pressure.

Instead, call an emergency plumber in Eltham to quickly investigate the issue and provide a diagnosis.

Some studies have linked consumption of infected water to:

If in doubt, call for professional help. 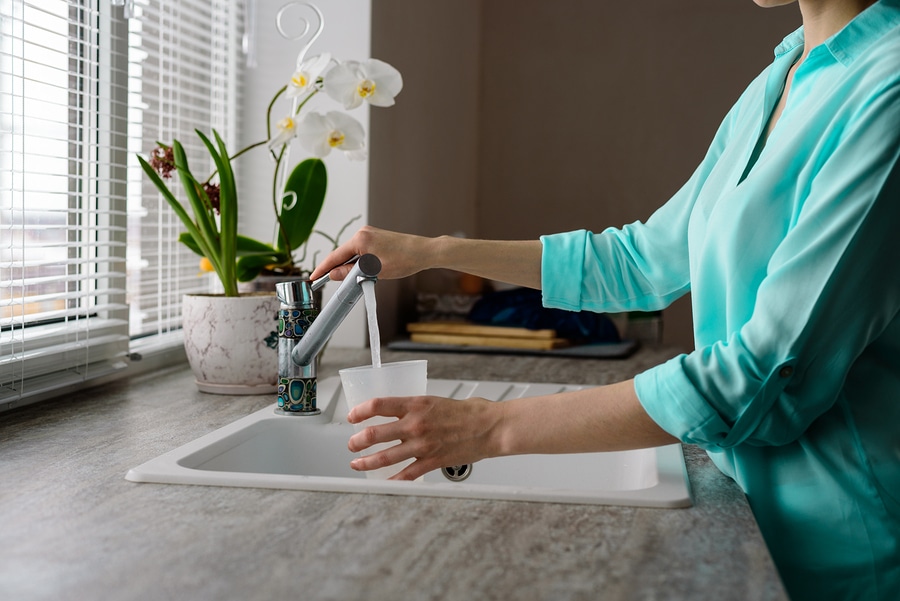 Okay, so your taps are producing cloudy water. What can you do?

The first thing you can do is flush your pipes.

When water sits, it’s much more likely to be tainted by corrosion.

If your pipes are rusty or otherwise corroded, letting the tap run for a couple minutes can (temporarily) restore your water to its previous state.

This can also remove muddy and gunky stagnant water.

For more long-term fixes however, we recommend getting your pipes flushed by a professional.

Not to mention, corroded pipes are the type of thing that should be replaced the instant they’re detected anyway!

While flushing might give you a temporary reprieve, if you want a permanent fix, you need to call a professional.

That’s because eroded pipes – one of the most common causes of cloudy water – aren’t something you can’t fix yourself!

Very few have the skill, training or tools to dig up and replace entire stretches of pipe on their own.

By replacing corroded and rusty pipes, not only is your Eltham plumber protecting you against cloudy water.

We’re also ensuring that your plumbing will be stronger and longer-lasting than ever before!

That’s because the materials science has come a long way since many houses in Melbourne’s north-east were built.

Nowadays, PEX and PVC offer superior strength, flexibility and lifespan at a fraction of the price – click here to read an awesome write-up from our good friends at Watermaster Plumbing.

A local team passionate about our community, H2-Pro is proud to offer a true emergency plumbing service. That’s right – when we say 24/7, we mean it!

Public holidays? Not a problem!

That means you can rely on us for emergency plumbing in Eltham and the surrounds whenever you need it, including during the upcoming Christmas break.

Our localised service area means we are always nearby, helping to provide rapid-response plumbing to homes all across the northeast.