“Out of sight and out of mind” – that’s the attitude many people take when it comes to their toilets. Maybe you don’t really care about the mechanics, as long as it:

Fair enough – we get it!

But your toilet is very complex, and is filled with countless different parts, valves and levers.

Pressing the flush sets in motion an entire chain of events behind the scenes – think of it like a Rube Goldberg machine.

So, what happens exactly? Our plumbers in Eltham are here to explain what you need to know!

What’s inside your toilet: what happens when you hit flush

To understand how exactly your toilet is able to evacuate waste and smells so well, it’s important you first understand each of the important parts that make up your toilet, and the role they play when you flush.

The list of parts is long and exhaustive – we’d be here for hours if we had to describe in detail how each one works.

Instead, we’ve gone ahead and picked out the most important ones, including…

Here’s a nifty video showing how a flapper controls your flush.

Next up, the fill valve

How does your toilet cistern fill back up after you flush? And what stops it from overflowing?

While, fill valves come in a variety of designs (just like flush valves), their job is the same: to control the inflow of replacement water.

Located at the water inlet, the fill valve is a bit like the bouncer of your toilet, controlling when water gets to come in and how much of it.

Each toilet contains a floating ball connected to a water supply gate via rod. As the water level drops with the flush, the float ball lowers, opening the gate and letting water in.

The role your S-trap plays

Ever wondered why your toilet doesn’t smell in spite of everything that goes down it? You can thank your S-traps for that!

S-traps (aka S-bends) form a seal between your toilet bowl and the sewer connection pipe. Using a bend in the pipes, traps create a water seal – that blocks out nasty sewer smells.

If you were to cut your toilet open, you’d see that instead of going straight down, the outlet pipe bends upwards first. By harnessing the power of gravity, this bend (the S-trap) leaves a small pool of still water behind.

While sewer smells may be strong, even they can’t break through water!

S-traps are the most common type of trap, but by no means are they the only one. There are plenty of different designs out there, which you can read up on here. 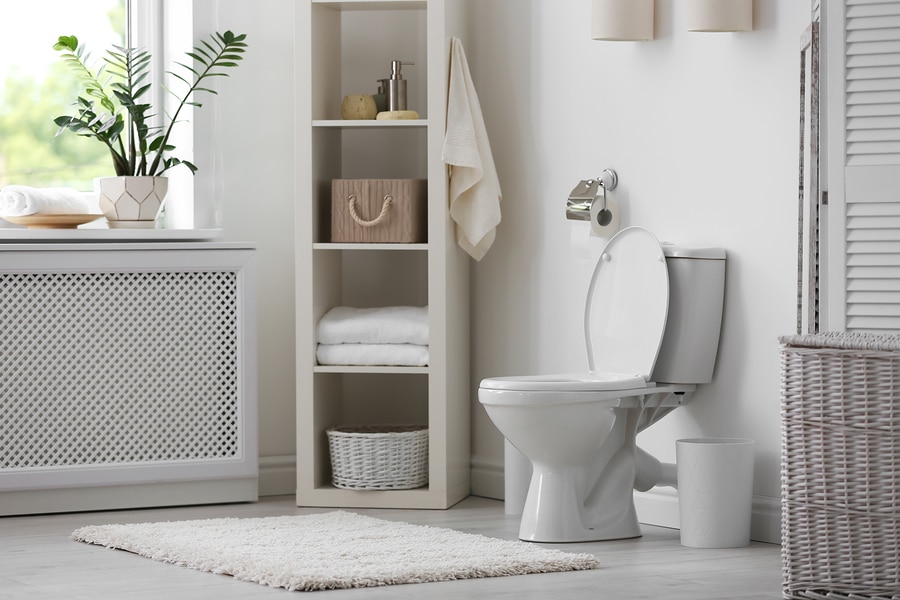 What happens when you flush

2) The siphon effect kicks in

You might be wondering to yourself “what stops my toilet from just overflowing when I hit the flush? Especially when it’ll be working against gravity?”

If water were gradually added to your toilet bowl, an overflow would be exactly what you’re left with.

This is where the siphon effect comes into play.

The sheer volume of water and the speed flowing into your toilet forces water over the S-bend.

By supplying a lot of high-pressure water at once (and into a small passageway to boot) overcomes gravity, and pushes waste over the hump and down your drain.

Fun fact: improvements to toilet design allow modern toilets to push water out with even more force. This reduces the amount of water needed, which is why modern toilets are so much more water-efficient.

3) The flush valve returns to place, stopping the flow of water

Since the vast majority of flush valves are made of plastic with rubber outlet washers.  When the flush valve is lifted, opening the siphon to your toilet bowl.

If you’ve ever emptied a bathtub, you’ll know that drains create a powerful suction effect. As the water level lowers, the flush valve is drawn back towards its starting position by this suction effect.

And when it does, it cuts off the flow of water to the toilet bowl, ending the flush.

4) Your cistern refills itself

As the flush valve lets water into your toilet bowl, your fill valve is also hard at work replenishing your toilet cistern.

The fill valve contains a water supply gate. Like we mentioned above, this is connected via rod to a floating ball, which lowers with the water level. As this ball lowers, so too does the water supply gate, refilling the cistern with water for the next flush.

The thing is, the supply of water coming in is less than the amount of water being flushed into your toilet.

That way, water continues lowering until the flush valve stops the flow of water.

After that, the cistern slowly refills itself until the float ball (and the connected water supply gate) reaches its normal spot, blocking off the water supply once more.

As you can see, flushing a toilet sets in motion a chain of events. That was a simplified, abridged description of what happens – there’s a lot going on behind the scenes.

And as such, a problem with just one part of the process can lead to a whole host of problems!

Asides from clogs, blockages and leaks, this can also include:

If you’re unsure how to solve these plumbing problems, our plumbers in Eltham can help.

Need a solution for your toilet and plumbing problems at home?

No matter where you live in Melbourne’s north-east, our team of plumbers are here to help.

We know that the last thing you want is a toilet that doesn’t flush properly – the horror!

That’s where we come in. Our plumbers in Eltham and north-east Melbourne are genuine locals.

We live in the area, we know our way around and most importantly, we’re always on call.

This means you’re guaranteed a fix whenever your toilet starts presenting with worrying symptoms!